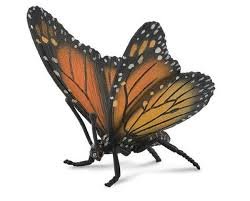 The monarch butterfly may be the most familiar North American butterfly, and is considered an iconic pollinator species. Its wings feature an easily recognizable black, orange, and white pattern, with a wingspan of 3 1⁄2–4 inches.

The eastern North American monarch population is notable for its annual southward late-summer/autumn migration from the northern and central United States and southern Canada to Florida and Mexico. During the fall migration, monarchs cover thousands of miles, with a corresponding multi-generational return north.

Monarchs have been bred on the International Space Station.