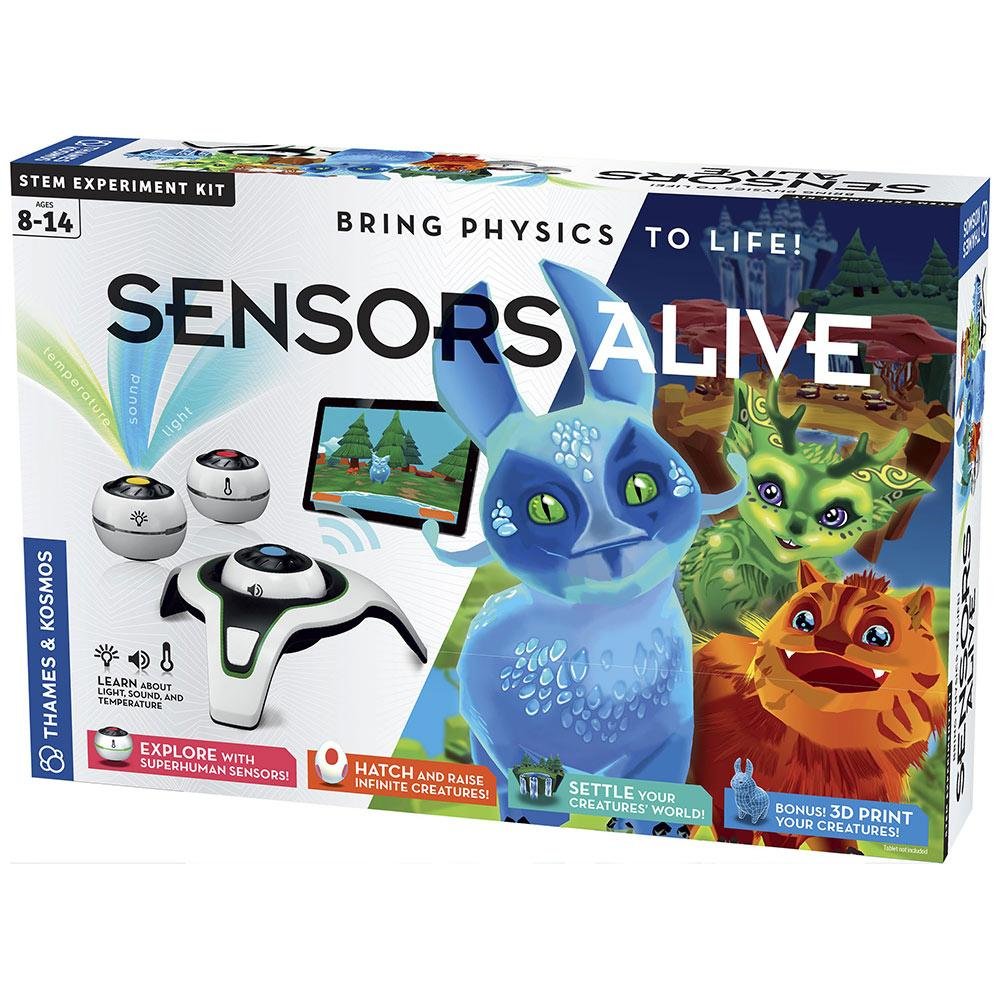 Designed for kids ages 9 and up, Thames & Kosmos’ Sensors Alive is an app-based STEM experiment kit that utilizes real-world sensor data to create unique creatures that kids can collect, play with, and take care of. And fortunately for kids, they’re not of the Frankenstein variety.

In a fictional bioengineering lab aboard the Calypso II, kids play the role of a BioFarmer and strive to create a digital world budding with colorful creatures. Using the three sensor pods (which measure light, volume, and temperature) and the free Sensors Alive app, kids can collect data and take measurements from their surroundings with the push of a button. Once they capture the information they need, they can transfer it to the virtual base station in the app and watch as it uses the data to determine what kind of attributes the creature will have. In game mode, the mission is to generate creatures using data. Kids can start by obtaining different creature eggs within the app, each of which represent a basic character type. Determining a creature’s features depends on a number of different things, most of which kids can control! For example, if kids place their sensors in a cold environment, the app might create a friend with heavy fur for warmth. If they take readings under the hot summer sun, the game might create a creature with lizard-like scales for deflecting heat. If tweens gather data in a dimly-lit room, their sensors might develop a creature with big, bulging eyes so they can see better in the dark.

In free mode, kids can gain more control over their measurement taking. They can hold the button atop each sensor for three seconds to take extended measurements, or press the button twice and insert the sensor into the base station to take a continuous reading. They can even take live measurements, which will display data capture in real time at any given moment. Throughout the process, they’ll explore aspects of their own world in an effort to create a digital one, and the possibilities are infinite. As kids use their three sensor modules to collect more and more data, they’ll learn about light levels, volumes, temperatures, and other physics principles that will spark their curiosity. Gone are the days when your kids don’t know about decibels, lux values, and degrees celsius. As players creatures’ grow in number, they’ll learn to care for them and build new environments that they can thrive in. They’ll even learn to produce food to keep them well-fed and happy.

Thames & Kosmos’ Sensors Alive science kit includes three sensor pods, one base station, and a quick-start poster. While the app is free to download on iOS and Android, kids will need a tablet or smartphone and eight AAA batteries.

Demystify abstract physics phenomena like light, sound, and heat as never before — with this highly innovative, gamified sensor physics lab. The core of this science kit is an app-based video game in which you use real-world sensor data that you collect from your environment to generate a diverse array of creatures. Create, collect, play with, and take care of your creatures in the app.

In a pretend bioengineering lab inside the game, kids play the role of scientists who use readings taken from three physical sensor pods outside the game. The readings are then transferred into the game via the base station. The sensor data dictates the different attributes your bioengineered creatures will have. For example, if you take a low temperature measurement, the creature generated will have long hair to keep warm. If the temperature is high, perhaps it will have scaly skin like a lizard. Or, a low light level captured by the light sensor might yield a creature with huge eyes to see better in the dark, while a high sound level reading might result in a creature with tiny ears. Additional attributes are controlled directly by settings in the app. Combined together, all of these variables lead to a seemingly infinite number of creatures you could create.

Continue to use the sensors to capture data that lets you care for your creatures, feed them, play with them, create habitats for them, and generate more creatures — all the while developing an intuitive sense of the different measurements you are taking with the sensors. You will gain experience in measuring light levels, volumes, and temperatures with the three sensor pods, and learn about the physics behind light, sound, and heat. Learning physics comes alive as you see the tangible results of your sensor experiments.