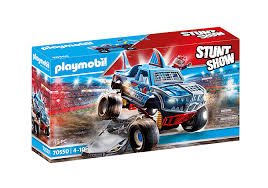 
With shark fin on the roof. With four spring-mounted tires for optimal adaptation to the ground. The rear flap of the truck can be folded down. With removable roof and room inside for up to four figures. Incl. drivable scrap car and cool stunt show driver Dimensions: 32x 16.5 x 18 cm (LxDxH)
The Stunt Show Shark Monster Truck is pure adrenalin for action fans! The ingenious design with a sleek fin on the roof, dangerous shark-bite radiator grille and grille windshield make the Shark Monster Truck unmistakable. With its fully suspended axles and wheels that adapt to any surface, the Monster Truck can handle the most difficult stunts and obstacles. The daredevil stuntman spares no risk and drives with momentum over a scrap car. This heavyweight is unstoppable! The set consists of a PLAYMOBIL figure, a shark-design monster truck with fin to put on, a drivable scrap car, helmet, gloves, megaphone and other cool extras.